The Panaji Traffic Police have reportedly been directed not to take any action against the dubious Advocate General of Goa Atmaram Nadkarni whose Mercedes car (sponsored by Goa’s illegal mining mafia) has been regularly parked and obstructing the public footpath below his office next to Baron’s showroom just off 18th June Road in Panaji.

Shame on this Goa’s now very notorious First Law Officer, who has truly lived to his name, by being an incorrigible Atmaram in letter and spirit. 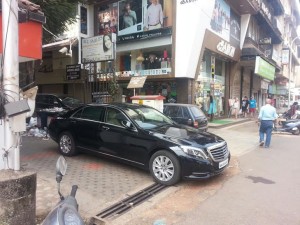