The beleaguered Pop star and Padma Shri Remo Fernandes should substantiate his reckless allegation that the minor child who was knocked down by the speeding car driven by his son Jonah is lying and attempting to extort money.

I have nothing personal against Remo Fernandes. Have pursued the case after Fr Savio Barreto, the Director of Basilica of Bom Jesus on 18th December narrated the sordid events of that Dec 1st accident. The very insensitive, uncaring and outrageous misconduct by the Pop Star at the scene of that accident and thereafter cannot be condoned by any sensible person.

The families of Remo Fernandes’s three musicians Selwyn Pereira, Victor Alvares, Dharmendra Hirve besides his liaison person Sunil Redker who were killed in that road accident at Kanpur on 18th September 2000 were all witness to the real and distasteful side of Remo Fernandes. If Remo Fernandes had the audacity to fail and abdicate his responsibility towards his own team of musicians, no care and compassion could have been expected from Remo Fernandes towards the minor girl grievously injured by that car recklessly driven by his son.

Am looking forward to that defamation case Remo Fernandes has threatened to file against me, while I vow to take on the Rock star by the horn so that it sets an example to anyone who dares behave inhumanly like Remo Fernandes did.

Nobody can be above the law. The police have been tacitly shielding Remo Fernandes and his son. The F.I.R against Remo’s son was registered 15 long days after that accident. He was also not sent for medical examination to ascertain if he was driving under the influence of alcohol or any other substance.

May I once again thank and commend the people of Goa for generously helping out the young accident victim Helan D’Souza currently at Ward No 105 in Goa Medical College. She was abandoned by Remo Fernandes despite it being his moral and legal responsibility to take care of the victim and her medical treatment. But the people of Goa did not fail her. Thank You, Goa 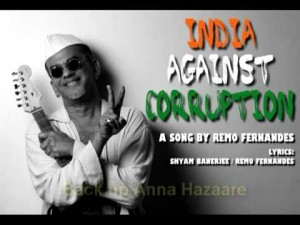