We are all entitled to celebrate our birthdays and nobody can have an issue over it. But the quandary with Defence Minister Manohar Parrikar’s 60th birthday bash scheduled to be held at the SAG ground in Panaji on December 13th is that the government machinery is also working overtime to ensure the success of this sponsored occasion.

A coterie of BJP leaders and some Senior government officers have been entrusted the task of coercing Casino operators, builders and other businessmen to generously pitch in. It is nothing short of extortion. The party is working in full gear to somehow mobilize 50,000 people to attend and they will be provided free transport and food besides Rs 2000/- per head. Attempts are on to also transport people from the neighboring states of Karnataka and Maharashtra. A coffee table book on Manohar Parrikar will also be released with 20 persons asked to write articles eulogizing Manohar Parrikar. The entire show is estimated to be costing around 70 crores. Under the guise of Manohar Parrikar’s birthday celebration, the occasion is being planned by the BJP as an unofficial launch of the election campaign for the 2017 Goa Legislative Assembly elections. 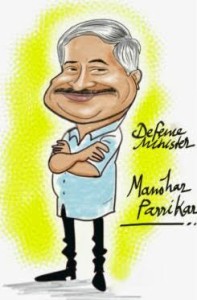