Let us publicly appeal to the Defence Minister of India Manohar Parrikar that in view of the massive and devastating flood crisis underway at Chennai, he cancel his 60th birthday fiesta scheduled at Panaji on December 13th.

It  would be highly improper and  infact a repeat of Nero fiddling while Rome was burning if the Defence Minister of the country is merry making in Goa while the country is shocked and has to remain in solidarity with the victims of the colossal Chennai disaster.

Let us hope that Manohar Parrikar would rise to the occasion and truly act as a Statesman considering that he is now the Defence Minister of the country and not a petty local leader.

It would be appropriate for the Defence Minister to be infact spending his birthday at Chennai helping out in the relief operations. It would afford an opportunity for Manohar Parrikar to demonstrate that he is a true Goan who is compassionate and an undisputed nationalist who would help his needy brethren in such dire straits.

Manohar Parrikar should also ensure that the crores of rupees collected for his mega gala birthday celebrations be sent to Chennai as Goa’s contribution towards helping out those victims and in their rehabilitation. 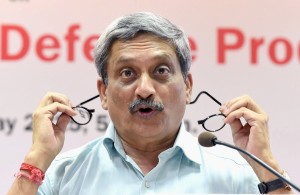