Supreme Court Judge Rohinton Fali Nariman who is arriving in Goa on 7th November on a nine day holiday has now informed the Goa Government that he will foot the entire bill of his holiday at the 5 Star Taj Vivanta, Old Hermitage Cottage.

Thank you Sir, for having taken the right decision and upheld the dignity of the high position you hold as Judge of India’s highest Temple of Justice.

Despite the Goa State Guest Rules stating that a Supreme Court Judge can be hosted as a State Guest for only three days and with stay at Raj Bhavan, Goa’s very dubious Advocate General Atmaram Nadkarni arm twisted and pressurized the officers to breach the rules and illegally seek relaxation of the rules to facilitate Justice Rohinton Nariman’s holiday in Goa. This came to light in information obtained under the Right to Information Act.

The Advocate General should never act as a broker in organizing impermissible Government largesse for Judges as it compromises the very independence of the Judiciary.

Judge Rohinton Nariman who is known to be upright and with impeccable integrity was obviously misled by Atmaram Nadkarni. This sad tale should act as an eye opener for other judges who should also beware of Atmaram Nadkarni’s tricks and manipulations to befriend Judges in an attempt to achieve his dream of becoming a Supreme Court Judge. If at all that day dawns it would be the darkest ever day for India’s Judiciary. It would be a cause for National mourning. 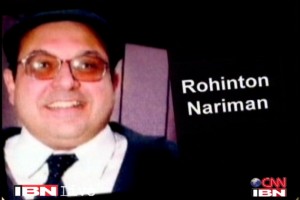