The Goa Government very high-handedly paid a whopping Rs 6, 37,721 for the dinner hosted by then Chief Minister Manohar Parrikar on 8th June 2013 at the Goa Marriot Resort for the 543 delegates attending the National Executive meeting of the Bharatiya Janata Party which was held in the Goa from the 7th to 9th June 2013. This has been revealed in the information obtained from the Protocol department at the Secretariat under the Right to Information Act.

As per the information furnished under the RTI Act a note was moved on 4th June 2013 to the Protocol department by Sanchita Banerjee Rodrigues, Press Liaison Officer to the then Chief Minister Manohar Parrikar that the Chief Minister would be hosting a dinner for delegates of the National Executive Meeting, decietly without mentioning that it was a BJP meet. The entire file notings processing that bill also nowhere mentions that it was a BJP meeting but just masks it as a National Executive Meeting.

As per the information furnished by the protocol department Manohar Parrikar while Chief Minister from 9th March 2012 to 8th November 2014 hosted a total of 48 official lunches and dinners which cost the Goa Government a total of Rs 40,96,032 (forty lakhs ninety six thousand and thirty two rupees). All this fun and frolic at the cost of the tax payer despite the State coffers being cash starved.

A perusal of the records obtained under RTI Act also shockingly reveals that in the 21 of the 48 occasions, despite there being no mention on what was the reason for hosting the lunch or dinner, the bills were cleared by the Protocol department with no questions asked.

This includes a dinner at Goa Marriott hosted on 9th March 2013 for 90 persons which cost Rs 1, 37,950 and another dinner for 400 persons at Hotel Mandovi Riveira on 25th September 2013 which cost Rs 3, 95,694 both for which the reason of hosting the occasion finds no mention in the request sent by the Chief Minister’s Office to the Protocol department.

All these documents obtained under the Right to Information Act will be handed over to the Vigilance department to seek a probe against Manohar Parrikar as there has been a clear misuse of public funds with bills cleared without being properly scrutinized and audited besides the bills inflated and manipulated.

This lavish and uncalled for illegal spending by Manohar Parrikar was a criminal waste of public funds and contrary to government’s own circular calling for austerity measures in view of the serious financial crunch faced by the State. Tax payer’s money cannot be squandered by the government on political party merry making. 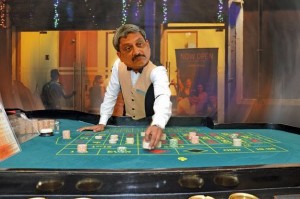