The Goa Government has sought an explanation from Sanjit Rodrigues the Managing Director of the Goa State Infrastructure Development Corporation (GSIDC) who is also the Commissioner of the Corporation of City of Panaji (CCP) over his three week absence from work last month.

As Sanjit Rodrigues has been frequently travelling abroad, his passport needs to be scrutinized and also ascertained whether he was obtaining necessary clearance from the Vigilance department to leave the country.

Action must be taken against Sanjit Rodrigues for his high-handed behavior and unauthorized absence from work. The conduct of Sanjit Rodrigues is contrary to the service rules and the laid down protocol for government officers.

Sanjit Rodrigues has been habitually disappearing without even informing his immediate subordinate officers. This conduct is also contrary to the government’s much publicized mantra of Good Governance and Transparency in Administration.

In September last year Sanjit Rodrigues had similarly left Goa without informing and was later found trapped in the Kashmir floods.

For Panaji to even dream of being a Smart city, the Corporation of City of Panaji would first need to have in place a full-time Commissioner who is honest and very transparent. 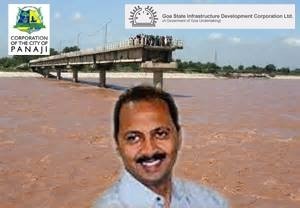