Justice V.R. Krishna Iyer had said “Even so, the creed of judicial independence is our constitutional ‘religion’ and, if the executive use Article 222 to imperil this basic tenet, the Court must ‘do or die’
So the Supreme Court of India has rightly nixed the National Judicial Appointments Commission (NJAC) which was proposed by the Narendra Modi government to craftily encroach and undermine the independence of the judiciary.

If the Judiciary is reduced to a mouth piece of the government, the Courts will lose all relevance and end up as dens of chicanery and jugglery. The Judiciary should never be manned by persons who are tilted or aligned to any political party. Judges should have the spine to crack on illegalities done by all politicians, regardless of how high positions they hold. It has to be ensured that judicial accountability is maintained at all times with all judges conforming to the highest standards of uprightness and integrity. If Judges cannot independently balance the scales of Justice, the temples of Justice become pointless.

The current Collegium mode is the safest and surest way to preserve the Independence of the Judiciary but it cannot continue being reduced to a cabal. It cannot be a very secret club with the proceedings not being a public record. This veil of secrecy is untenable and must go. The colleguim system must be given a constitutional status with all its deliberations being very transparent and brought within the ambit of the Right to Information Act.

Caroline Kennedy had very rightly said “The bedrock of our democracy is the rule of law and that means we have to have an independent judiciary, judges who can make decisions independent of the political winds that are blowing” 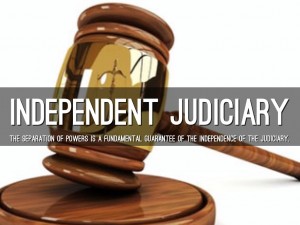 POLITICIANS SHOULD LAY THEIR HANDS OFF THE JUDICIARY – Aires Rodrigues