A record number of 71 tourists were reported dead at Canacona in South Goa over the last decade. This has been revealed in the information furnished under the Right to Information Act.

In an attempt to find out how safe a tourist destination Goa has been,   information was sought from the Director General of Police on details of all Indian and foreign tourists reported dead in Goa over the last decade.

Of the 38 foreigners dead 7 were killed in road accidents, 5 due to drowning, 2 suicides and 24 natural deaths of which 8 were under the age of 50 which includes 22 year old Finnish National Felix Dahl whose mother has been alleging that her son was murdered at Canacona.

Of the 33 Indian Tourists reported dead at Canacona, 9 were killed in road accidents, 19 due to drowning, 1 suicide and 4 natural deaths.

While we await the details from other Police Stations across Goa, the Canacona figures are a clear indicator that Goa is a very unsafe destination for tourists.

The Goa Government must reflect on this grim reality especially on World Tourism day being observed on September 27th.

Due to lack of foresight by successive governments Goa has today become a drug, gambling, prostitution and crime haven. 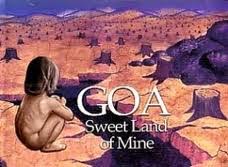